There is no doubt, end feds work!

Whether no-tune, multiband, end feds work is still debateable (In my opinion).

Last night I built a 20m end fed in particular to attempt a RaDAR to RaDAR QSO with Tom G0SBW on the weekend. 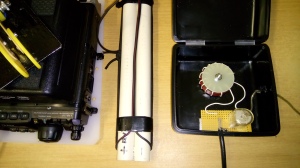 On receive, I have found when the best signal strength is where the capacitor plates are unmeshed then you’re no where near resonance on the LC low pass filter tuned circuit. I pulled this toroid out of a MFJ945e mobile tuner which I am modifying as a Fuchs style tuner and have no idea of the type but it is a red toroid which obviously should be suitable.

I started off with 26 windings and ended up at around 13 and found resonance with the capacitor half meshed. With a SWR meter in line I came close to zero SWR and using the FT-817’s built in SWR indicator it was confirmed! Full power output from the 817.

Looking forward to using my 10m fibreglass telescopic mast, this end fed (10.1m wire) and my battery powered (7 A/Hr SLABS) FT-897d to make contact with Tom. He recently had a QSO with Namibia so conditions may be favourable!

The 20m end fed circuit is very simple, I have a 40m end fed too which has proved itself over and over again!.

Once you think you understand the very basic basics of antennas then you start to realise how little you know. The Internet is a minefield of information too and your gut feel has to guide you in the right directions. I browsed the Net for suitable diagrams which hopefully the authors will not mind me sharing here. I like simple, simple is good!

Although here in South Africa we use the metric system I still remember this formula from many years back. Also the wires being horizontal the general feedpoint impedance has always been known to be more than 50 ohms …. actually I had 75 ohms in mind.

Here the feedpoint impedance comes closer to 50 ohms in the inverted vee configuration. Radiator lengths change somewhat too! Aha there is a formula for METERS !

At one stage in my ham career I tried the windom antenna, with little success I might add. Same formulas being used to calculate the length of a half wave dipole in feet. Only here, the feedpoint has been shifted to one third from one end and the feedpoint impedance is at a point where it’s around 300 ohms (Or is it 200) thus needing a 4:1 balun to match this impedance to the 50 ohm coax of the transceiver. Now also, the “dipole” has become multiband?

Then a few years back I started using end fed antennas because of their rapid deployment ability in the field. Here the feedpoint is shifted to the end of the dipole where the feedpoint impedance becomes a guess at best but is theoretically around 3000 to 5000 ohms. These antennas are better than using a 1/4 wave vertical which requires a ridiculous number of radials in order to work efficiently.

I built the manually tuned Fuchs tuner which allowed a certain amount of multiband functionality using a half wave length of wire for the lowest band used. It took me a while to build but worked well. Why I took it apart again is still a mystery! Maybe it was too big for my RaDAR backpack.

I also built a “fixed tuned” 40m end fed which really works well even with an old military radio, the B25. The tuner is as simple as it gets, an LC low pass filter. Simply “Plug and play!!!”. (The environment does have a slight effect though)

A more conventional end fed arrangement uses a primary and secondary coil wound on a suitable toroid and capacitor where resonance on the secondary tuned circuit causes a high impedance at the resonant frequency thus adjusting for the relatively high input impedance at the end of the end fed dipole.

Then when I thought I’d started to understand end feds there came along multiband end feds with no tuning needed at all (After intial tuning of the lengths of the radiator). The section before the loading coil is a half wave wire on the SECOND band in this “multiband” antenna.

It requires building an impedance transformer. Here there is confusing information on how to build one but this is the best example I could find. What is important here is how to count the windings. Why the one half of the secondary coil is wound like this is still a guess? The primary winding twisted around the first two windings of the secondary is a must for best coupling, apparently.

The purpose of the 100 pF very high voltage capacitor across the primary winding is also a guess? It actually forms a parallel tuned circuit in the primary winding whose resonance is “X”. One thing that does happen apparently is they get blown up while using high power on the lowest band of the multiband end fed. They need to be able to handle HIGH VOLTAGE!!! 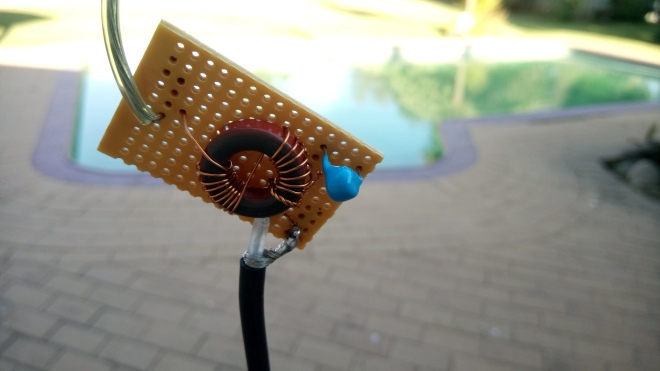 And a good guidelind for impedance RATIO’s – Do the actual INDUCTANCES really matter? It’s the RATIOS that are important here.

Looking back at the windom antenna, could one not simply insert the secondary coil in line with the end fed dipole around .05 of a wavelength from the end? The .05 wavelength of wire has been suggested in many writings as a suitable length for a “counterpoise”.

There is no adjustable capacitor in the secondary here as used in the end fed tuners mentioned above and is surely simply feeding a dipole other than at the centre or a third of the way from the end as in the windom.