Much has been mentioned about team work during the RaDAR challenge which brought about new ways of thinking in taking on the challenge of RaDAR. It must be noted here, that the challenge is not to compete against anyone else or any other team but it helps to share notes at the end of a RaDAR ops for self improvement and also to acknowledge the hardships many go through during such challenges.

My good friend Julian OH8STN wrote (edited), “The team aspect is certainly an interesting new perspective. Still there are some of us around who are doing RaDAR ops alone, and sometimes in much harsher environments. If this is going to be a team effort, perhaps a team category could be considered, to insure things remain balanced and fair.

Individual RaDAR operators in the field, regardless of their operating environment are always at a disadvantage compared to teams. What’s behind my opinion is the broad range of ease/difficulty, from operator to operator, during a RaDAR challenge. Teams may make it even more simple for an event which by its very nature, should actually be a challenge”.

Julian gave his feedback on the April RaDAR challenge via his Blog. “The entire idea of a RaDAR Challenge (from my perspective), is getting outside with your gear, trying to get your comms on in the most difficult operating environment for an amateur radio operator. That’s QRP (or QRO) Portable, far removed from the comforts of your ham shack. Everything that can fail, will fail in a RaDAR Challenge. So we spend most of the time preparing for a RaDAR Challenge, just to be successful, when it comes around. Incidentally, the same skills required for field communications preparedness, are right here in the RaDAR Challenge”.

Julian further commented, “WX Conditions were not bad at all. The temps hovered between -2c and 0 for the entire day. When there was plus temps, I had freezing rain. When the temperature dipped, I had snow. Snow would have been my preference since the wet gloves contributed to minor frostbite on my finger tips upon arrival back home. From my perspective, there is little difference between 0C and -20C. The thing which kills you is the humidity. Still it could have been worse. Some operators will ask why I didn’t start a fire. Great question, by the time I get a fire going, it could easily be time to tear everything down and head off again. RaDAR Challenge ops require you to move after 5 contacts. Had my PSK and JT65 ops worked as planned, I would not have been there any more than 20 minutes. So in this case, I needed to rely on my clothing to keep myself dry and warm while I did what I needed to do. You see, the RaDAR Challenge doesn’t just test your radio gear, it also tests you, your clothing, your skills to troubleshoot, your planning and coordination skills, … It really is a beast if you want it to be. It is also disaster comms 101”.

Julian says it like it is. The RaDAR challenge is there for exactly that, a challenge yet few go to the trouble of actually challenging themselves alone or even as a team effort for that matter. It’s all OK sitting in a comfortable shack but why not prepare yourself for the worst for is it not there where we may one day be needed?

The next challenge will be winter here in ZS. The extreme conditions that Julian OH8STN experienced is by far more difficult than what our winters are.  Be RaDAR active ….. 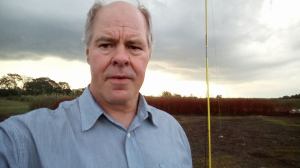 I know how challenging RaDAR can really be. It was designed to take you out of the comfort zone. With every challenge we all learn new things and that is good. The results of the April challenge have made me think a little differently on how we take on the challenge.

Certainly Sid ZS5AYC and his team showed that a team effort can reap benefits and I’m anxious to see how they will handle the on foot category in June. Sid and Adele are SOTA activators too so they know how difficult it is to get to a SOTA destination. Moving after every 5 QSO’s on foot will be a new challenge for them and I have no doubt that they will do well.

I’ve always taken on the RaDAR challenge alone but as we know if you want to include satellite comms and digital modes the load get heavier. Having a team, even a team of novices or interested people could make this load lighter. It will be an exciting opportunity for newcomers to amateur radio that they feel they too have a purpose.

I’m not sure how Sid arranges his operations but I can guess if one operates the radio, another does the logging and maybe a third and fourth person do the antenna deployments and adjustments.

This has got me thinking in a new direction. I’ve always promoted the idea that RaDAR is an ideal training / testing tool for new hams maybe it is time that it be recognised as such.

My next challenge will be a team effort too, on foot of course!!!

There is no doubt that on foot RaDAR is the most difficult of all the categories even though fairness in distances to be travelled are built into the equation to make things more or less equal.

Greg devised a way of carrying his equipment while on the move. It’s extremely difficult to carry a suitable station around using only a backpack. 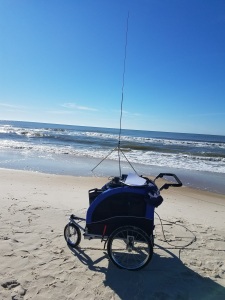 Greg went the extra mile to attempt inter continental RaDAR to RaDAR communications but conditions are just not suitable at the moment. Greg however could work some DX from the beach!

Greg’s logbook tells a story, of determination and success, no matter the odds. 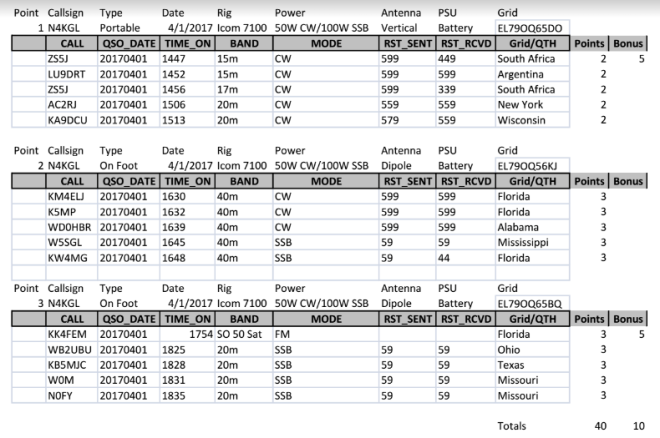 All I can say is, WOW!!! What an excellent job, a team effort, forever raising the bar for RaDAR!!! 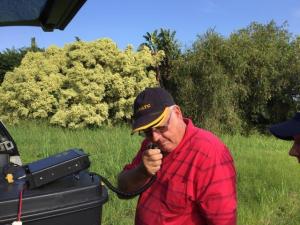 Congratulations to Sid ZS5AYC and his RaDAR operations assistants, his wife Adele ZS5APT and good friend Leon ZS5LS. They took part within the real spirit of mobile RaDAR, true examples to the concept of moving amateur radio. 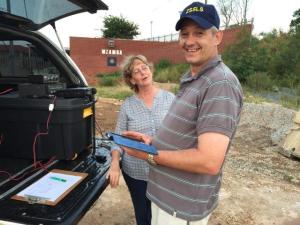 Even the submitted logbooks are of the highest quality and excellence! 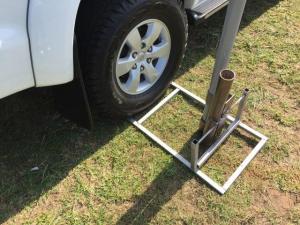 They plan to do the next RaDAR challenge on foot!!!

The first RaDAR challenge has come and gone. Personally, I did a few things differently seeing I was unable to move around on foot or even ride a bicycle. I chose to do a field deployment and used higher power which made things a little easier no doubt! There is no limit on output power other than the legal limit as far as the RaDAR challenge goes. 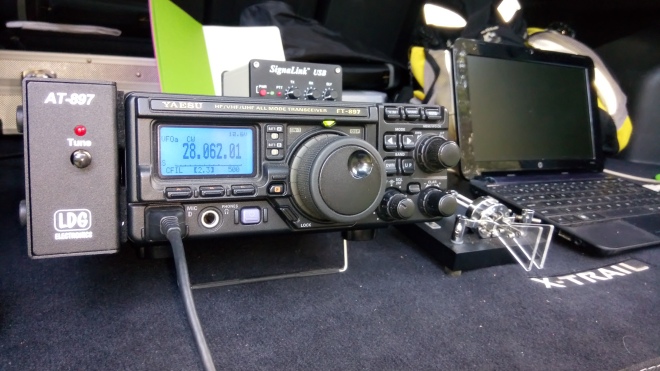 I used my Yaesu FT-897d. It hadn’t really been taken on such an outing before as the 817 always takes preference as far as moving RaDAR is concerned. My power supply consisted of two 7 A/Hr Gel cells wired in parallel both contained within a plastic lunchbox. The batteries held out throughout the four hour period and the 897d gave full cooperation at all times. I did have a spare single SLAB just in case the dual SLABS went bad on me, they never did! 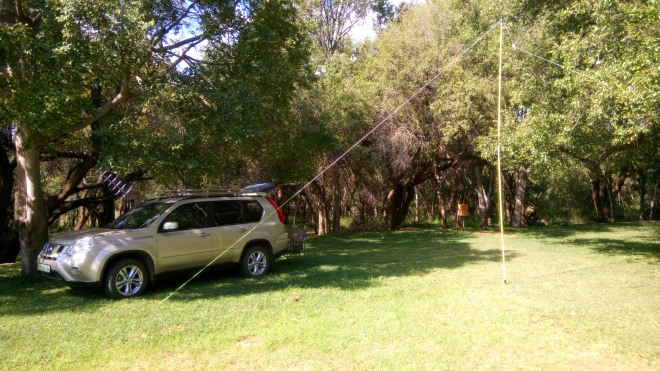 As far as the antenna system was concerned I put up my multiband link dipole with the painters pole mast. Even band changes were easy only having to lower the pole at an angle and doing the necessary link changes. It took less than two minutes to do a band change!.

Greg, N4KGL had set up a sequence starting at 10m and ending at 20m including the WARC bands to attempt an international RaDAR to RaDAR QSO but propagation was not favourable. John ZS5J did however make contact with Greg. John had used 100W and a Steppir beam from his home. Wire antennas were just not effective enough in these conditions. I did however hear John on every band even being only 800 km away including the LU station Greg worked at around 539. I gave John a call too but he could not hear me. 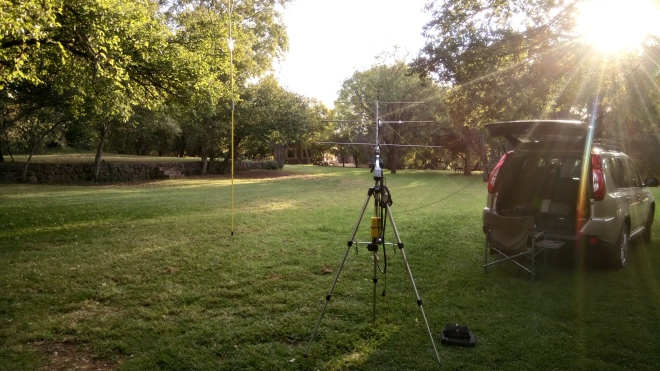 I just managed a satellite QSO with Harry ZS6AMC via FOX-1A (AO-85). Somehow I have great difficulty with this satellite using a 70cm uplink and a 2m downlink. SO-50 is very easy in comparison but there was unfortunately no SO-50 pass during the selected four hour period. The ultimate goal was inter continental R2R.

The weather was great, like South Africa normally is. Julian OH8STN battled through the snow and ice rain while Pieter V51PJ braved the high temperatures of the Namib desert! I ran the station until darkness set in. I was able to make three JT-65 QSO’s on 20m. A little rusty with choosing the right sequences and replies but contacts were made from the field! 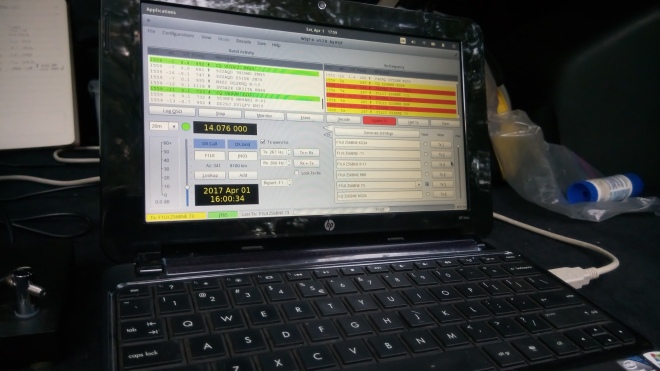 I still prefer moving RaDAR, after all that is what it’s all about but had fun being a portable field station looking out for the moving stations. We need each other, I’ve always said that.

It’s worth mentioning that the International RaDAR WhatsApp group kept the world in contact, inspiring each other with neat photographs and information on activities and frequencies. It can be used for day to day uses too  and still we should try when we can for those elusive internation R2R QSOS’s.

Looking forward to the July challenge!!!