My second RaDAR challenge of the year could be seen as a success or seen as a failure. I’d like to concentrate on the successes. A new ham, Carel ZS6CFP asked if he could join me in the RaDAR challenge as he finds it very interesting. Carel is very willing to learn and so I agreed that he join me, an activity I normally do alone.

Carel’s younger brother Stephan, was also interested in joining the group and is also very interested in ham radio. My grandson Eduan, has sometimes accompanied me on my excursions and he became part of the team too. His prime purpose, a responsible job, was to be the “Ops photographer” and in a way he did that job reasonably well. 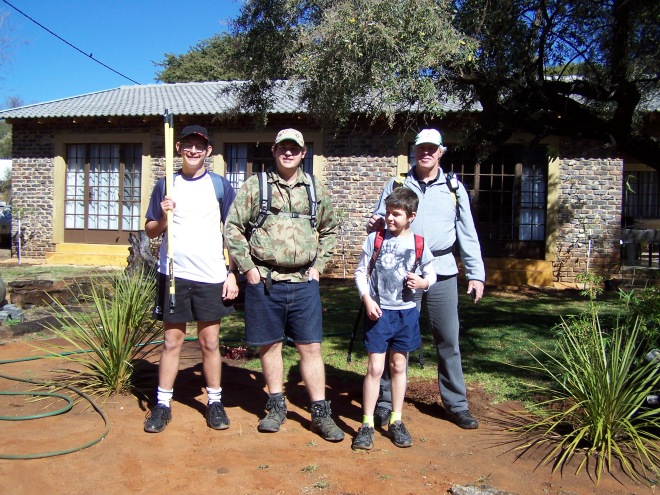 My XYL Elrika, took this photo in front of our weekend home “down by the dry river” before we set off on our journey, walking to the first deployment point.

Carel carried a heavy load in his backpack. An ex SADF military Fuchs B25, two 7A / Hr SLABs wired in parallel and a “faulty” 40m fixed tuned end fed, equipment that I have loaned to him to get started with his ham career. Stephan carried their food and water and the painters poles… 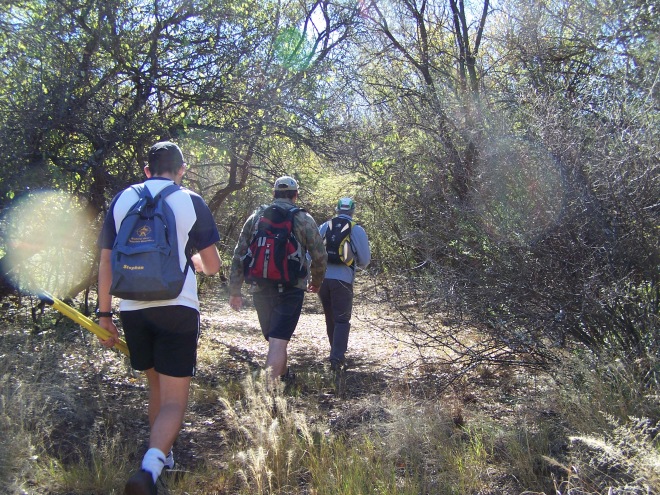 At our first (and last) deployment point, I demonstrated how to use the painters poles as a mast for the end fed antenna emphasising that the mast be neat looking, military style. What looks good, works good! 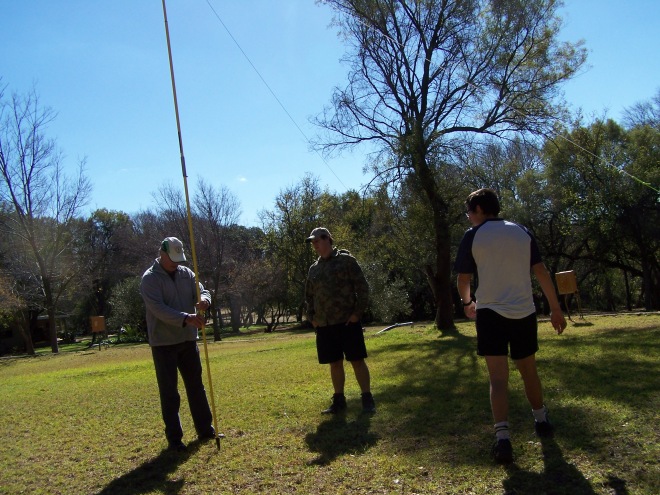 I had a feeling that there was something not quite right with the 40m end fed but left it at that as it would demonstrate that one could do some fault finding in the field. Indeed, the end fed didn’t even bring signals into the B25’s receiver – the band was stone dead!

We opened up the box and the hardware still looked intact. As I tried to turn the capacitor I found it a little sticky. The antenna was left out in the winter rain only a few weeks back and rust may have set in. I used my 817’s built in SWR meter to see what was happening and within a few minutes we had a working antenna again! 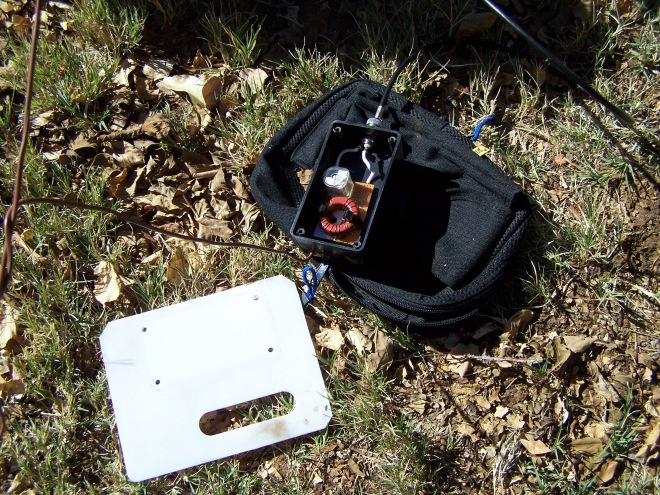 Stephan quickly got down to listening for activity on the 40m band and I went off to set up my own 40m end fed and miniature tuner I’d built the night before. 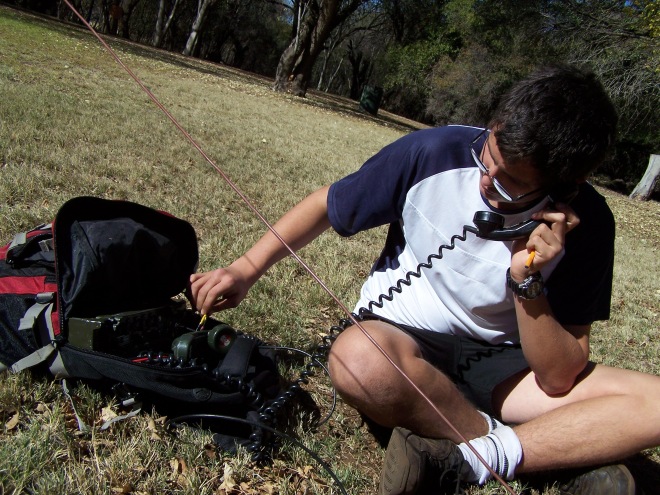 My new 40m end fed consisted of a 20.3m long wire and a 1m “pigtail” as a counterpoise. The tuner was built form a red T50-2 toroid with a 27 turn secondary and a 3 turn primary with a common ground. The capacitor was a small 150 PF poly-varicon. I used a short length of RG58cu 50 ohm coax to the FT-817ND. The antenna was launched over a very high tree branch as a sloper sloping to the east which I managed to do using a thin nylon rope and a rock. I used my home brew rechargeable penlight battery pack as a power source with internal penlights (inside the FT817) as a backup. 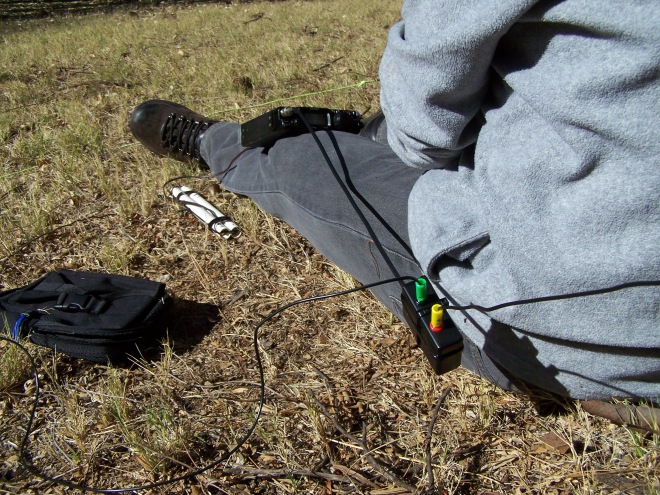 I managed to work two QRP contest (running alongside the RaDAR challenge) participants on CW, Pierre ZS6A and Daryl ZS6DLL both using HB1A’s. Daryl gave me a 599 PLUS! He was the one who sent me a few toroids through speed post during the week so I could build my new RaDAR end fed tuner in time for the challenge! End feds are by far the RaDAR operators best friend!

There were a few slow CW stations rag chewing on the AWA net on 7.020 but I had to get ready for the FO-29 satellite contact. I unfortunately had no response from Kieth ZS6TW for a sked but luckily Andre ZS2BK had heard about our request for SatComms during the RaDAR challenge. We set up sked via email the day before.

I was not as focused as I normally am working alone and had to send young Eduan back home to fetch the Arrow yagi I accidentally left behind. Luckily he’s a fit young lad. 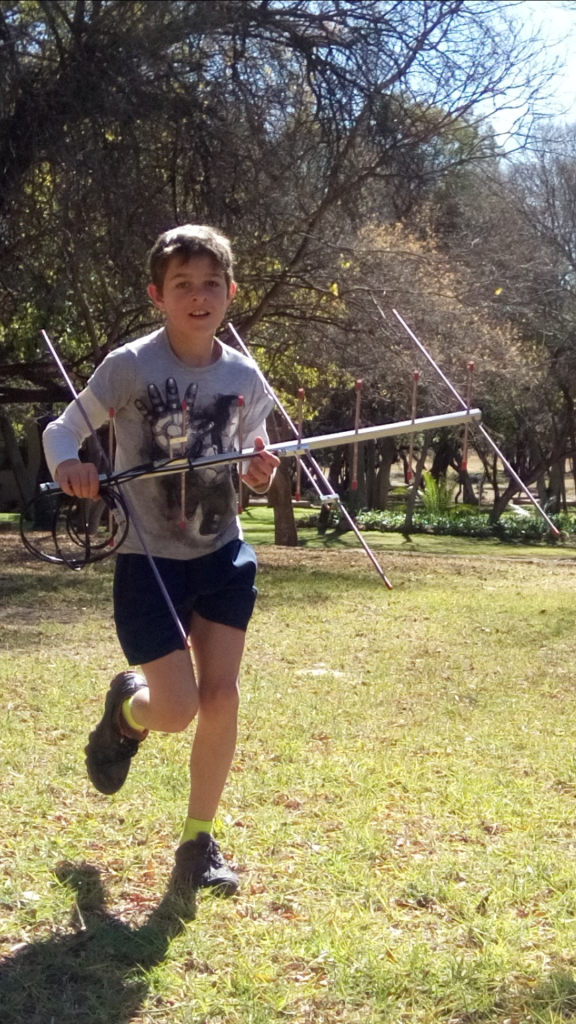 I had also left my BNC to BNC adapter at home so I had to improvise using two separate coax cables to each yagi of the Arrow and remove the diplexer stored in the handle. Actually I’ve been meaning to do this anyway so I can use the FT-847 again for base station SatComms so it was a step in the right direction. The diplexer can only handle 5 Watts. I just had to make sure the FT-817ND was programmed properly for the right antenna port, for the right band and the correct FO-29 up and downlink frequencies dialled into the two 817 VFO’s and SPLit mode set. 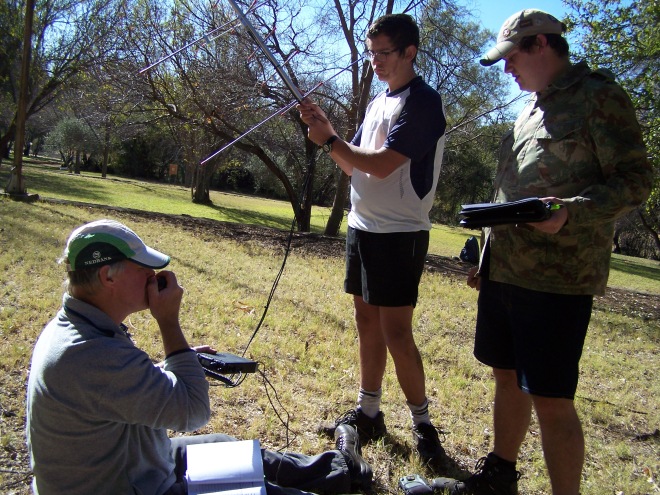 We were very lucky to make a contact with Andre as the young guys took turns tracking the satellite which is a rather specialised activity especially with no signal feedback working in “Half duplex” mode. Carel later tried to make contact also which was a reasonable success but our tracking was way off the mark.

A recording of our contact can be heard here : https://drive.google.com/open?id=0B6itjIwvuEFOd0d3c2c3d2p3cDg

It was then time to get my clothes line dipole up in the air for a sked with Greg N4KGL and Tom G0SBW. I pulled down the 40m end fed and used the nylon pull rope to raise the dipole as high as possible orientated to the northwest. I heard signals from ZS1TTZ in Cape Town at 599 but he was rag chewing with another station and so I went up to 14.346 MHz. It was quiet but I called a few times in desperate hope for a DX QSO – nothing. Conditions were not favourable. I tried listening to the other bands but signals, if any, were way down.

The young guys were looking for excitement as I’d said we could try catching a fox as a radio direction finding exercise. I’d packed my lensatic compass and the Android app SigTrax was now bug free and ready to be used as a RDF tool. So we packed up and moved off to the RaDAR Playground a kilometer away stopping by the house for some cool drink first.

But, that’s another story …… 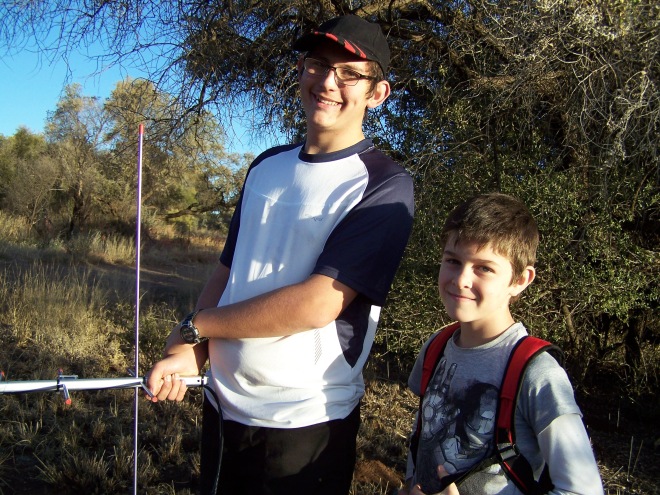