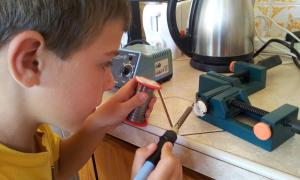 On a chilly winters Saturday morning, Eduan sat on a chair, the warm sunlight shining through the dining room window bringing comfort from the cold. He was startled by the sudden question, “Hi uncle Eduan, what are you doing?”, asked the little boy from across the street. He was visiting young Sam, Eduan’s son. “Hello Juandre, I’m paging through some old magazines that my grandfather stored in cardboard boxes many years ago. He said they would become quite valuable one day. I guess he was right, no one prints magazines anymore”.

“Wow, uncle Eduan, I’ve never seen one, a magazine? Why are some big and some of them small?”. Juandre had many questions, quite an inquisitive little boy and Eduan thought to himself, “How interesting young kids are, so willing to learn but nothing is as it was anymore. How lucky I was to experience many of the things these young children will never see”.

“Juandre, go and call Sam and I will explain to you both”, said Eduan. Juandre ran around the house calling, “Sam, Sam come quickly, your dad wants to show some zines he found in a box”, they raced to get back to Eduan. “Why are you crying dad?”, asked little Sam and Eduan quickly wiped away the tear that ran down his cheek and swallowed, deeply. “Not crying, son, it must be the dust from these old boxes” explained Eduan but realized his son had witnessed his tender side.

“Juandre, Sam’s great grandfather and my grandfather, was a radio ham”, explained Eduan, “right from before I could walk he used to let me play with his ham radio things like a big morse code key, the buttons and the dials on his big radio’s ….”, Eduan noticed the vague looks on the two little boy’s faces, they had no idea what he was talking about.

“Dad, you’ve lost us”, Sam said in an alarming way. “Please explain what a morse code thing is and what is a radio? Is it like dad’s glasses?”. Eduan thought to himself, “I have a lot of explaining to do, much has changed since I was their age”.

“Come and sit next to me and let’s page through a few of these old magazines”, said Eduan. The two young boys looked in awe, and both shouted out excitedly and in stereo, “dad!”, “uncle Eduan!”, “all the zines have the same name, R a de e oh Zed Ess !”. Eduan knew then the boys would not be stopped in their quest for knowledge. It was his responsibility to spread the word.

Eduan was alerted to a message flashing within the glasses he wore, a message from his friend in Hawaii – Noise levels non existent on 15 an 20 metres, put out calls…….nothing. Terrain is like Mars and has extremely high iron oxide content, I can’t to stay too long, in case of altitude sickness.

Eduan looked at his son, “Sam, your great granddad was a radio ham for over a half a century. That is a long time. He made sure I took part in radio youth activities when I was your age. I got two book prizes, one for his radio club and one for myself. He loved browsing through my book, it was all about low power radios. Grandpa loved nature and practicing ham radio in the field. He loved jogging too, he wasn’t a champion in any way but always believed if he could take on the challenge it would be possible for others too”.

Eduan further explained to the two boys, “Much has changed since I was your age. Grandpa had old radios which he sold to some friends much older than him, they were collectors items. He had other radios too. He spoke of APRS short for Automatic Position Reporting System and TNC’s which is short for Terminal Node Controllers and also said there used to be packet radio that used the same protocol, or way to communicate between radio stations. It was used to send short messages all over the world. It worked very well and he received replies to questions within a day or two. That was pretty quick considering people used to write letters to each other then that took two weeks on average to get to the addressed person”. The two boys sat and listened carefully as if they understood. “We’d be pretty lost if messages took that long to get”, said Sam. Eduan smiled and was proud of his son’s response.

“Sam, messaging became faster through what they called SMS, short for Short Messenging Service, then. When handheld telephone devices could connect to the Internet then other cheaper services became available. You could even do APRS on such telephone devices that it could be used without a radio, you did not even need a GPS it’s built in just like your comms unit. Not many people use a radio now”, explained Eduan.

Sam got all excited, “Dad! Where are granddad’s radios now? We’d really like to see them!”. Eduan replied, “I still have grandpa’s radios. I have permission from the governement to have them on display but they have been sealed that they cannot be switched on”. “Cannot be switched on?”. Little Sam was quite disapointed. “Why?”.

Eduan explained in his way, “Goverments of the world were told by scientists that they have received intelligent messages from space. Five short tones followed by two long and short tones. For decades radio hams taking part in senseless contests weekend after weekend constantly sent the morse code “DiDiDiDiDit DahDit DahDit”, faster than normal, a sort of common denominator and it appears that life from other planets received these signals somehow and have become aware of our existence on earth. There was a need for radio silence…..” Eduan distinctly remembered listening to his grandfathers CD’s, The War of The Worlds …..

“Awesome!”, Shouted Sam and Juandre, “just like our XXXBox virtual reality games”. The children did not realize the graveness of their passion.

“Around ten years after the turn of the century, BYOD, or short for Bring You Own Device, became quite popular. People used them to connect to the Internet to share electronic mail and to talk to each other. They could even use the devices to see each other no matter where they were in the world! Radio repeater systems could be accessed using these handheld devices and it was no longer any use to have a radio. If you really wanted to, you could listen to someone else’s radio over the Internet but that became expensive especially if you wanted to use it to communicate with other radio stations. It was the beginning where radios became just too expensive to own and lost sales stopped production lines for radio’s but the BYOD unit’s continued to improve and everyone had one.” – Eduan just gave a history lesson in a few short words.

“Every connection the the Internet is identified by what they call an IP address. The world was united because it made no sense to be separate. Like the magazine’s name ZS, ham radio call signs were replaced with an IP address number as it uniquely identifies the user. Everyone had their own IP address! The GPS is always switched on so your immediate position is always known. For our own safety the national government says. Boys don’t be too concerned it is how we live now. It was different when I was your age.”, said Eduan, he’d already said too much! 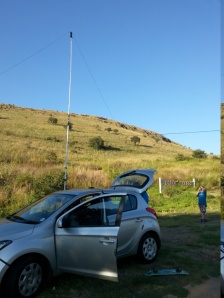 It is difficult to determine how many official participants took part in the April 2014 RaDAR contest because not everyone sends his / her log to the contest organiser for evaluation. The RaDAR contest requires movement after every 5 QSO’s. It’s not everybody’s cup of tea but it’s really a fun activity and should be seen as such. Some RaDAR operators, like John ZS5J, do send at least a check log. The following radio operators submitted logs – Dirk ZS6AKU, Eddie ZS6BNE, Jaco ZR6CMG, Lucy M6ECG and John MW/ZS5J (Check log).

Dirk worked from home as a portable station, Eddie travelled by mountain bike, Lucy took on the “on foot” category, Jaco took on the mobile category and John the portable category. Lucy and Jaco excelled in their operation by communicating for the full four hours while moving after every 5 contacts and are the resulting winners of their categories.

The ultimate goal for the 2014 international RaDAR contest are the inter continental RaDAR to RaDAR QSO’s. John and Eddie were successful in making such a QSO. John was on holiday and had deployed a portable RaDAR station on a hill in Wales. Both stations were using only 5 Watts. John’s antenna, a vertical dipole and Eddie’s antenna a roll up 10m wire J-Pole. The QSO took place using CW on 28.060 MHz. Signal were around RST 529.

John’s comments to Eddie on Facebook, “ I was thrilled to work you from a field surrounded by sheep in Wales, UK during the RaDAR contest using CW QRP both ways….that was an adrenaline rush for me!”. That says it all. John submitted a check log but could very well have been the winner in his category. He made many DX QSO’s from his portable RaDAR station in the field. John unfortunately left his camera at home and was unable to take a picture.

Congratulations to all the winners!