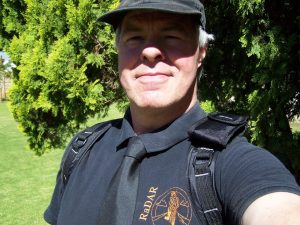 I stood in the dark alongside the Molopo river, the air a pleasant chill, and I admired the stars above, the milky way, and I hoped to see a moving object amongst the many millions of of tiny lights. I thought about today, RaDAR day, many looked forward to it for months now.

Today started a little early, 10:30 local time to be exact. I had a sked with Etienne ZS6Y to work Funcube, AO-73, a little cubesat. I could not pack my RaDAR kit for I use it for satellites too. I deployed outside, my Arrow dual band yagi mounted on a tripod and the backpack with FT-817ND on the ground standing there like a dog waiting for it’s master’s commands.

No points could be claimed for this historic QSO as a RaDAR contest QSO it did not fall within the contest period. Nevertheless, it was a point for RaDAR SatComms – it’s been  a while!

Later this afternoon I drove out to my RaDAR ops area. The idea was to get my trusty mountain bike ready to move out to deployment point 1, 3 kilometers away. The first time I’d used a bike during a RaDAR contest. 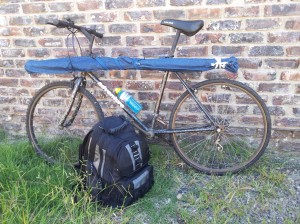 This is an old bike with perma-tubes (solid rubber!) and not easy to ride, nevertheless I had goals to achieve and I was driven to succeed. I deployed at the first deployment point. I used a fixed tuned end fed for 40m as a sloper the far end held high on the ten meter high Klaus mast strapped to a fence post.

My first contact was Dirk, ZS6AKU, also a Comrades runner and supporter through many a RaDAR activity. Then there was Jaco, ZR6CMG calling CQ RaDAR on 7090 kHz.

To my surprise, Gert ZS6SMI from Lichtenburg called, and we had a successful QSO.

I had a half an hour to get to the next point and deploy in time to listen out for John. I climbed on the bike and started pedalling, moving at 6 minutes a kilometer …. it’s possible to run faster than this! My legs were cramping and it reminded me of many a close finish during marathons and some not close enough but I had to get to the next point in time …. there was no other way and I pedalled!

The deployment point I chose was a mistake! I was hoping to use a perimeter fence below my 10m J-Pole for what it was worth. I was joined by a few young interested children who weren’t doing my mission and focus much good.

I got the Klaus mast up with the 10m wire J-Pole hanging from the top, coax fly leads in place and I tuned to 28.060 – POWERLINE NOISE! My heart sank – how would I hear a weak signal with this noise but there was John calling! I battled to hear him for the young children were asking numerous questions – I answered John barely hearing my own side tone and the paddle was sticking – I’d be pretty embarrassed about the quality of my sending.

I must still talk to John but as far as I know he a deployed as a RaDAR operator on a different continent to his motherland and that could very well be an inter continental RaDAR to RaDAR QSO – we sent locators, mine was KG34ac19fk and his grid IO71ls.