Digital devices are becoming more and more part of amateur radio and in particular for the RaDAR operator. There are applications available for Android devices. A list of my favourites (Amongst others) are:

Echolink – A client program that can be used to access Echolink enabled repeaters and simplex links anywhere in the world. It can be used much like using a handheld. A mic / earphone system can be used for convenience.

Morse decoder – A digital modes program used to decode morse code heard over the radio using either speaker to mic or a dedicated sound card interface to the radio.

AKA – A digital modes program used to transmit morse code over the radio using either speaker to mic or a dedicated sound card interface to the radio. The program makes use of parameters and the results like GPS position can be converted to morse code and sent over the air. Very handy when used as a pre programmed morse keyer. It has a beacon function too!

DroidRTTY – A digital modes program used to decode RTTY heard over the radio using either speaker to mic or a dedicated sound card interface to the radio. RTTY can be generated and transmitted using VOX / MOX on the rig.

DroidPSK – A digital modes program used to decode PSK heard over the radio using either speaker to mic or a dedicated sound card interface to the radio. PSK can be generated and transmitted using VOX / MOX on the rig.

AndPSKMail – A digital modes program specifically written to work with PSKMail servers around the world using either speaker to mic or a dedicated sound card interface to the radio.

HamGPS – An excellent GPS utility used to determine position in Latitude / Longitude or a grid locator even to more than 6 digits! It can determine direction to another grid, handy for orientating yagi antennas while in the field.

APRSDroid – This application uses the cell network to communicate with APRS servers on the Internet. Good where there are no APRS SatGates or IGates nearby or within range.

Endomondo – This is a sportman’s training application but can be used for RaDAR too. It shows the track travelled on Google maps. It shows distance and speed and the information can be shared with others via Facebook. A nice way to let people or hams know exactly where you’ve been.

GPSEssentials – Many tools and widgets that can be set for your particular applications. Ideal for RaDAR recces where photos can be taken and positions recorded on a map for later viewing of the environment.

DTMF – This is a handy utility where DTMF signaling is required and your rig does not have a DTMF microphone or other facility.

Last but not least.

ElectroDroid – This is an absolute must for every ham or home brewer. It also has a simple circuit simulator that will get the young ones interested in electronic circuits.

Many of these applications have a small charge but are worth every cent and one contributes to the advancement of the digital modes development within amateur radio.

Contests are a good opportunity to test RaDAR field and mobile stations. One is sure that there will be activity on the band. I have been impressed on numerous occasions as to the quality and strength of signals from an ever increasing number of QRP (Less than 5 Watts) stations appearing on the local frequencies.

I recently introduced a new concept of RaDAR. That is, the “One contact per kilometer moved” principle. This could be a real fun activity and will ensure fast deployment and re-deployment times. In the past, many of us spent a half hour or more getting ready to take part in a contest. In this case, much innovation will be needed to build a movable station with very effective rapid deployable antennas. Voice procedures would need to be fast and to the point. Information to be passed would need to be, at minimum,  an accurate GPS position and not just a 6 digit grid square so the RaDAR operator would need to carry a GPS as part of his / her kit. A format needs to be agreed upon that can be sent accurately using CW or voice (SSB / FM).

The divisions of RaDAR being Fixed, Mobile and “On foot” could all participate. There will always be fixed stations and RaDAR needs these stations too. Fixed stations could take GPS readings and plot them on a map, preferrably using APRS software like UI-View32 or similar. It will be fun seeing where all the RaDAR stations are deploying and in which drection they are moving!

An unofficial exercise will be arranged some time this year. In the meantime get your gear ready for some fun. If the exercise proves to be a success, it could become another exciting RaDAR contest on the calendar in years to come! It would take the form of a quick “Sprint” much like the ZS3 and ZS4 Sprint contests which seem to be very popular and attracts many participants.

History
Rapid Deployment Amateur Radio (RaDAR)
What is RaDAR?
The evolution of RaDAR
What constitutes a “True RaDAR” Station?
It is desirable that the RaDAR operator is able to
RaDAR Contests
References
External links

Radio amateurs from South Africa, came up with a concept (one used for many years by the military and others) to build a comfortable portable radio station capable of operating for extended periods while walking or stationary after walking to a specified site. The idea was discussed in an open forum and ideas gleaned from many of the local hams, some prototyping was done and the “Shack in a Sack” (SiaS) concept was born.

Subsequently it was decided to include the SiaS in one of the South African Radio League Mobile HF Radio competitions. Some simple ground rules were laid and off everyone went to build and set up a station to operate /ss or portable /p. The first team of “Shack in a Sack” hams who took part were: Deon ZS1AFU/ss, Johan ZS2CX/ss, Eddie ZS6BNE/ss, Kevin ZS6KMD/ss, John ZS5J/ss, Tienie ZS6MHH/ss, Stephen ZU6ET/ss, Nico ZS6SNH/ss , Charles ZR5CBT/ss, Doug ZS1DUG/ss, Club operator ZS1WRC/ss, Hennie ZS1HR/ss and Renier ZU1RDU/ss.

August 2009 – RaDAR – “Rapid Deployment Amateur Radio” initiative was launched. SiaS was a concept and needed a name. Unfortunately all the discussions that took place via the SARL Forum on SiaS, no longer exist.

August 2009 – The launch of the RaDAR business card. Subdivisions, “On foot”, “Mobile” and “Fixed”. The RaDAR station can carry a business card with his callsign and RaDAR subdivision logo. Good for Amateur Radio public relations.

August 2009 – First query on RaDAR from outside South Africa from Jack VK4JRC in Australia.

April 2010 – 1st SARL RaDAR Contest (Winter). Over a 100 individual stations were logged during the April 2010 RaDAR contest. Most stations took part for fun.

May 2010 – Dutch radio amateurs take RaDAR to the next level. The Lowlands 5×5 RaDAR group was formed by two Dutchradio amateurs , Elmar PD3EM and Peter PD1AJJ.

September 2010 – French radio amateurs take RaDAR to the next level.

As from January 2011,  official SARL RaDAR contests held every year in April (Winter) and November (Summer).

April 2012 – The introduction of an official contest logbook specifically designed for the RaDAR contests. It can be downloaded at http://www.nwinternet.za.org/zs6bne/RaDAR/files/RaDARContestLog07April2012.doc

April 2012 – Proposal by ZS6BNE to practice rapid re-deployment. The concept of “One contact per kilometer moved”. GPS coordinate information to be passed together with signal reports.

November 2012 – RaDAR diagram updated to accommodate the new rule structure. The new rule proposals can be accessed on https://zs6bne.wordpress.com/2012/11/15/radar-contes-proposed-rule-changes-for-2013/ 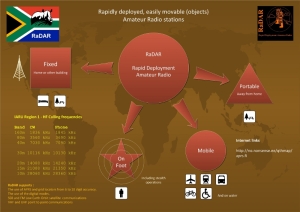 RaDAR is a concept. RaDAR is not an organization nor does it compete with any organization. RaDAR is a way of setting up an amateur radio station quickly and having fun. RaDAR is a “mindset” or a “methodology” about being flexible to enable operations under difficult conditions without external resources. RaDAR neither has nor needs a command and control structure.

The evolution of RaDAR

RaDAR has somewhat changed a little expanding from an “On foot” operator to include other stations but emphasizing rapidly deployed, easily movable (objects), Amateur Radio stations.

What constitutes a “True RaDAR” Station?

To be considered as a true RaDAR station, the entire station equipment, radios, batteries, mast, antennas and refreshments must be easily portable and hence the need to carry the equipment for at least 1 km prior to setting up.

It is desirable that the RaDAR operator is able to

Operate an amateur radio station away from any building or vehicle although this is not a prerequisite.

Carry equipment , radios, antennas, masts, food, water and shelter to the final destination, in a vehicle , on foot or wheelchair.

Provide power without relying on any third party.

Communicate in a professional, accurate and effective manner.

The RaDAR contest operates under the rules of the SARL.

I downloaded a WordPress application for my “Samsung Galaxy Note” Android Smartphone yesterday and it was an easy task to register my own Blog on WordPress. I chose to keep it ham related using my ham radio call sign ZS6BNE.

I have had Blogs in the past hosted on my own website and they worked well. Very good for referring back for history and notes. Those Blogs were deleted and the information “Lost”. It was also a mission keeping spammers away to such an extent that no legitimate friends could post replies. I’m hoping it will be better on WordPress!

It was a good idea at the time to register my own website and later another but it serves no purpose now and so I will be closing them down. Blogs on platforms like WordPress together with social media like Twitter, Facebook and the occasional Forum are all one really needs to be part of the social network.

I like to promote the RaDAR Concept (Rapid Deployment Amateur Radio)  at every opportunity and will do so here too.

This is my first entry on the Blog, I will build it from this point on.